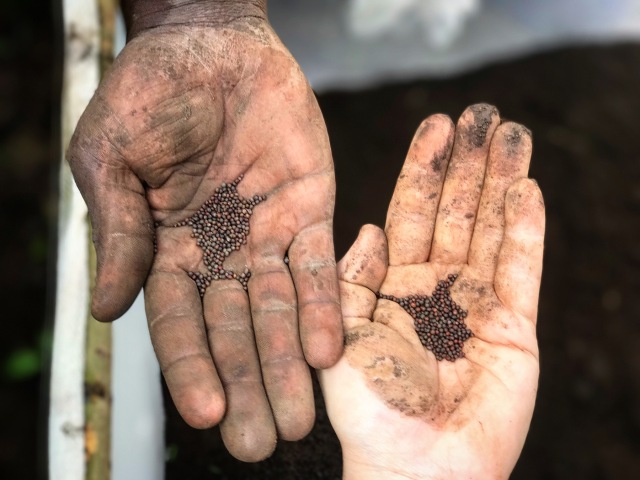 I’ve been slowly bringing seeds to Africa for just over a year now. I’ve been stock-piling, preparing, and mostly looking toward the great potential that awaits us. They are incredible seeds that can’t be found here, at least not easily. They are mostly heirlooms, including some unusual varieties. I brought with me seeds from all over the world: Guatemala, India, Thailand, France, Italy, Mexico, America and beyond. For the most part, they are seeds that will hopefully survive and thrive in a tropical environment, but some of our plantings will be purely experimental. Some seeds were purchased from specialty seed companies in the United States. Others were gifted to me by farmers, friends and family. I have several goals with these seeds, the most important being to MULTIPLY that which we’ve started with. My old farmer friend, Wild Bill, once told me, “If you don’t multiply, eventually you’ll die.”

Wild Bill comes from a time and place when, in order for your family to survive, you had to know how to raise your own food. If the cows or chickens or goats got eaten up or died before they had calves or chicks, well…eventually you were left with a whole lot of nothing. The same was true for the vegetable seeds. Neglect to save seeds and you’d be empty handed when it came time to plant the next season. These days, especially in the developed world, we don’t need to multiply anything except hopefully the numbers in our bank accounts. Or so we think.

In some ways, Africa is as old as time itself. Definitely older and, in a lot of ways, less sophisticated than even Wild Bill’s earlier twentieth century American experiences. In rural (and even urban) Uganda, the old ways of doing things still hold true when it comes to surviving in an economy that’s been left shattered by so much corruption, war and disease. Mix these ingredients with over-population and a serious lack of resources, education and social services and, in a very real way, you’ve got an empty-handed mess on your hands.

And so, these seeds aren’t just seeds. They are the potential for life, health, and income. They are food for a lot of people I know and love. Some of whom are dangerously close to a precipice of, literally, starving to death. These seeds aren’t hybrid or GMO. Their ability to multiply isn’t reliant on whether or not a person has the money or ability to buy more from a company whose greed has found a way to control one of the earth’s most precious gifts. In a sea of monocrops, the seeds I’ve carried with me to Africa hold a millennium of diversity.

These seeds play a role in the bigger picture of our survival as a planet, but even more specific to my role in this new journey is that they are the tiny pod-shaped coins that will hopefully make a difference in the lives of people whose names I know and whose children I love. To me, this is personal.

A little over a week ago, we planted our first seeds. It was a deep act of faith. There have been a lot of uncertainties in so many aspects of this work and especially in building a new life here in Uganda. The potential impermanence of it all has, at times, been staggering. One day I realized that God was giving me the opportunity to decide for myself what I want. Did I want to stay and invest myself in this particular property and at this time? He told me that, if I wanted to remain, I had to show Him by planting those precious seeds. Admittedly, I had been holding off. I was afraid that if I planted the seeds, something might go wrong and I wouldn’t see them grow into maturity. If that happened, all that seed collecting, dreaming and planning would somehow become a huge loss. There were a lot of reasons to hold off on planting. And yet, in God’s straightforward invitation to decide for myself, I knew with my whole being that my future was being decided by this one small act of faith. Of course, God knew all along what I would choose. But for the first time since Carl died, I felt myself making a decision from my own personal preference. It was a powerful moment. The sky became brighter when I realized from this new vantage point that what I wanted and what God was doing, were one in the same thing. A seamless, brilliant match. When I surrendered my life to God, I did so fully, completely. And now, here I was standing at the edge of a future in which God was giving me my freedom in the deepest possible ways.

I planted those seeds. And when I did so, I planted my faith firmly in a future that God Himself planned for me before I was even born. Perhaps a million times over, grief will be turned into life. May life be multiplied. May despair be continuously turned into joy. The day I made the decision to plant those seeds is the day that God gave me a freedom like I have never before known. It’s funny how the decision to root myself to this place is exactly the thing that has given me wings.

Thank you, Abba, for letting me find my way by first setting me free. You know my heart. Since the beginning of time…you’ve known. You’ve always, always known.